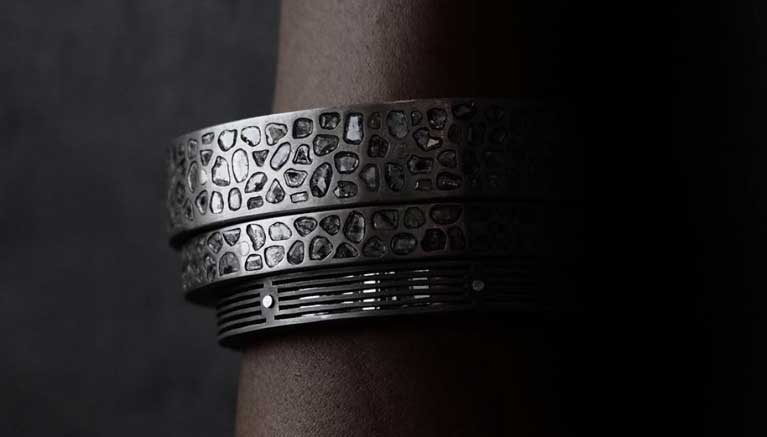 Pieces from Paris-based Parts of Four are designed and handcrafted by artist Evan Sugerman in Bali, Indonesia. The designer's unique jewelry is based on sculptural concepts and processes. Sugerman uses innovative and cutting edge materials - like rough diamonds, acid-treated silver, silver-gold fusions, and more - to push the boundaries of traditional jewelry design and challenge the status quo. His individualistic approach results in collectible and wearable objects that possess the utilitarian nature of modern architecture combined with the imagination of myth and magic.

"Inspiration is absorbed in everyday life, countless times a day, but the process of creation I employ for this brand has become self-reflective and void [as much as possible] of external inspiration. When designing new pieces I do my best to take in as little visual stimulus, no images. This may sound extreme, but I have personally found it too easy to become influenced and automatically begin to replicate rather than create. Obviously everything is based on something else, it would be absurd to argue that any idea is truly unique, but I do my best to keep that referencing subconscious.

My process is very much like the work of a modular sound synthesist, creating connections and exploring harmonics. Fundamental forms (frequencies) are used over and over again, layered, combined, filtered." - Evan Sugerman

We’re always on the search for fresh and unique design perspectives, and we were delighted to discover Parts of Four’s truly distinctive and extraordinary take on jewelry design. We love how their architectural, sculptural, and spiritual influences all find their way into the pieces, which demonstrate how materials like sterling silver and gold can hold history, magic, and power. We also like how the designs are gender-neutral and non-seasonal, making them versatile and enduring.