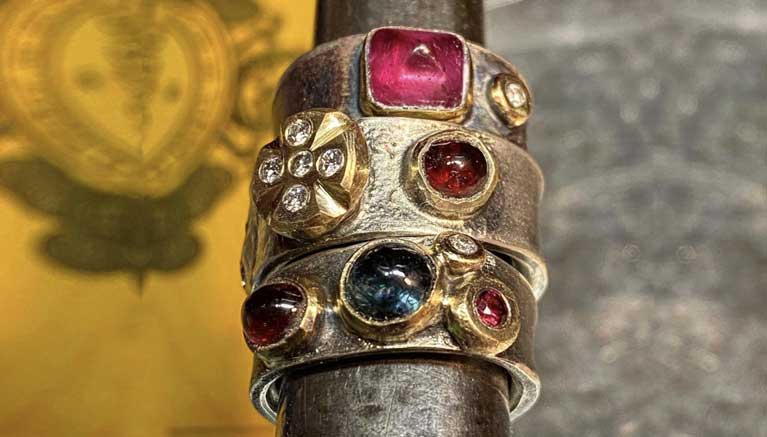 A hidden treasure from an austere yet magical destination located on the Pacific coast between San Francisco and Santa Barbara, Big Sur Goldsmith produces one-of-a-kind fine jewelry pieces infused with a rich family legacy that started with the creativity, inventiveness, and skill of patriarch Karl Lee.

Karl first developed his passion and skill for metalsmithing at The Esalen Institute in the 1960s, and by the 1970s he had perfected his skills in both casting and hand fabrication, mixing metals like 22K gold, platinum, and silver in unique ways. In the 1980s, Karl's son Aurthur started apprenticing under his father, and daughter-in-law Carrie Armstrong soon followed, eventually contributing their own vision and point of view to the pieces.

“My father’s work was always distinctive and singular. Carrying on his tradition, we do everything the old way, creating our own alloys and hand fabricating every part of our work. We do not cast and do not buy premade findings. I try to honor the gemstones that he collected as best as I am able, and when I see a stone that I think he would have liked, I can't resist adding it to the collection." -- Aurthur Lee

Big Sur Goldsmith's distinctive pieces transport us through time and reconnect us to a special time and place where the late Karl Lee, founded his iconic metalsmithing studio in Big Sur. Known for his unusual collection of rare gemstones and mastery of traditional metalsmithing practices, Karl built a legacy that lives on through his son Aurthur and daughter-in-law Carrie.

We love that Karl's spirit, fused with his successors' creative vision and talent, are palpable in the careful, handcrafted nature of the work. It is truly something special to be treasured today and for generations to come.